FIRE chiefs have renewed their desperate pleas for visitors not to drop litter or use disposable barbeques after another blaze on tinder dry ground, this time at the old Tolladine Golf Course in Worcester.

An area nearly the size of a football pitch was engulfed in flames on Monday (August 1) evening in the latest blaze to affect Worcestershire open spaces, weeks after fires ravaged a swathe of Lickey Hills Country Park and Hartlebury Common.

Three crews from Worcester Fire Station were called at 7.55pm to a fire in the open off Darwin Avenue in Tolladine. 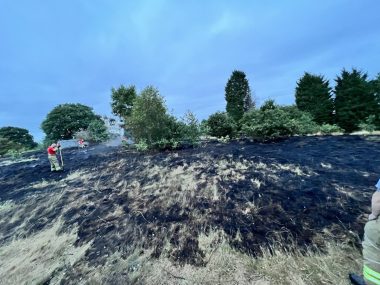 Hereford and Worcester Fire and Rescue Service (HWFRS) revealed some 4,500sq metres of grassland and tress were on fire but brought under control using a hosereel jet, one main jet and multiple beaters.

Once the flames were put out, a further inspection of the site using thermal imaging cameras took place at 2am but no hot areas at risk of causing a further fire were found.

Crews were then able to leave the scene at 2.37am on Tuesday (August 2), nearly seven hours after their arrival.

No injuries were reported but a significant amount of damage was caused to the landscape. While fire chiefs have not confirmed the cause of the fire, police believe it may have been caused by a fire pit.

The blaze has again prompted HWFRS to urgently remind people to take extreme care with no sign of significant rainfall for the parched ground.

Discarded litter such as food packaging, empty tins, coffee cups and even footballs and other waste material is combustible with the potential to spark off more fires.

This applies particularly to cigarette ends which may not be completely extinguished when discarded, and bottles and glasses which are known to concentrate sunshine onto dry vegetation.

Group Commander Thom Morgan of the HWFRS protection department said: “It is highly unfortunate litter continues to be dropped in large quantities despite the many reminders we’ve issued about the dangers this causes.

“I would urge people not to discard litter of any kind, and above all please don’t take disposable barbecues out into the countryside.

“Have fun on our open spaces but please behave responsibly and remove all litter, either by disposing of it in official waste bins or taking it home with you. We’re grateful to you for your support.”

Anyone with information about the fire is asked to call police on 101 quoting 701 of 1st August.