WORCESTER will play host to the Queen’s Baton Relay this summer less than a week before the 2022 Commonwealth Games kicks off in Birmingham.

Some of the city’s best-known landmarks such as the Cathedral, the River Severn, New Road and the Arches-Worcester will form the backdrop for the Worcester leg of the relay at teatime on Friday, July 22.

A busy schedule of activities and events are planned for the Queen’s Baton Relay, with opportunities to highlight untold stories from baton bearers who are striving for change in their community. 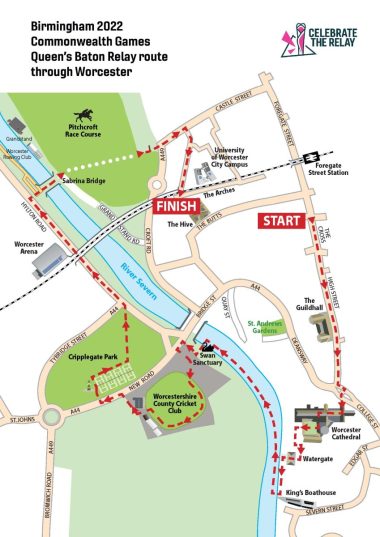 Organisers have promised a ‘memorable visit’ to Worcester’s Racecourse before the baton’s trip through the city climaxes with a celebration at The Arches – Worcester. It will conclude a packed July of celebrations in city as The Hive marks its 10th birthday and Worcester’s iconic Carnival returns.

Thousands of baton bearers, each with inspiring backgrounds and stories, will have the honour of carrying the baton during its journey.

After arriving back in England on July 4, the iconic baton will begin the final leg of its global journey in the West Midlands on July 18 and on July 22 it will visit Pershore, Upton-upon-Severn and Malvern before arriving in the Faithful City.

Just six days later, the baton will reach the finish line at the opening ceremony for the 2022 games.

Devoted fund-raiser Tony Frobisher revealed last month he had been chosen to run a leg of the relay on July 22 after being nominated by Acorns Children’s Hospice and he will be joined by fellow charity stalwart Philip Fowler.

Phillip was nominated by Worcester City Council and Worcester Community Trust (WCT) to carry the baton and the WCT trustee said it was a huge honour.

“I was genuinely flabbergasted when I received the letter inviting me to be a baton bearer, but very proud,” he said.

“To be nominated by the City Council and the Community Trust is a huge honour and I’m very much looking forward to it.”

The relay began at Buckingham Palace last October, when The Queen placed her message to the Commonwealth into the baton and passed it to four-time Paralympic gold medallist Kadeena Cox, who had the honour of being the first of thousands of baton bearers to carry the item.

Since then, it has visited Commonwealth nations and territories in Europe, Africa, Oceania. It still has further destinations to visit in the Caribbean, the Americas, and more countries in Europe.

Mayor of Worcester Coun Stephen Hodgson said: “We are absolutely delighted that the Queen’s Baton Relay is coming to Worcester and hope that as many residents as possible will turn out to line the route and be part of the celebrations.”

UPDATE: M5 horse safely caught but delays of around an hour now in both directions