ONE of the highlights of the sporting calendar takes place on Saturday (April 9) with the 2022 Grand National at Aintree.

And ahead of the four mile, two-furlong test ultimate test of endurance over 30 obstacles, two bookies with more than 30 years’ experience in the betting ring have put pen to paper for ‘Mug Bookies’, an insider’s look on how punters may be able to beat the bookies more often. 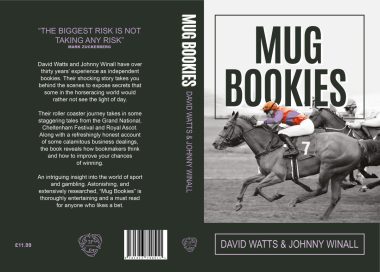 Spetchley’s Johnny Winall and David Watts from Gloucestershire have even named a racehorse after the book.

Johnny started as a small independent bookmaker with a tiny shop known locally as ‘the chicken coop’.

After a few years he joined forces with David to establish two further prominent shops with a view to expansion, but after some calamitous business dealings their partnership ended.

With Aintree in punters’ minds this weekend, Johnny reflected on his rather mixed experiences at one of the greatest shows on turf which began in 1989.

“I realised it was merely a PR exercise after I spent all day taking money on National bets and another two days paying it all back out!,” he said.

“The following year I had a plan to bet the winner and keep most of the takings, however my selection, ‘Durham Edition’ finished second and I ended up losing on the race.

“In 2001, there appeared to be only two finishers, bookmakers began rubbing their hands. However, two fast thinking jockeys remounted their horse’s filling third and fourth place. This left the bookies paying out on four places as usual,” Johnny added.

The pair came together to write Mug Bookies, not as a warning to gamblers but an insiders’ take for those who may fancy a flutter to have a chance of winning more often.

The book is written with great humour and an easy writing style which will compel you to turn the page. Their roller coaster journey takes in some staggering tales from the Grand National and the Cheltenham Festival.

“The inspiration to write Mug Bookies was driven to remember the vastly diminishing independent bookmaker and many of the colourful characters we met along the way,” Johnny said.

“We also wanted to document how the industry has changed through the decades,” he added.

But why go the extra ‘furlong’ and name a horse after the book?

Johnny admits: “It was my idea as I thought it would bring a unique marketing opportunity. The horse is owned by a syndicate and while the book and the horse are strongly linked, they are separate business entities.”

An interview with two former bookies wouldn’t be complete without a tip or two and Johnny said: “Discipline and preparation are crucial in successful gambling, equally you need a good stake plan.”

“Obviously the biggest mistake you can make is to chase your losses, keep your discipline and never bet on too many events.”