REVIEW: How the 'Boy from Bret' became a Pears hero - Once a Pear...My Cricket Journey

“WHEN I think of Worcestershire, I think of Mitch” – the words of England all-rounder Moeen Ali in the foreword to ‘Once a Pear….My Cricket Journey’.

In addition to being a warm tribute to his great friend and former Pears skipper Daryl Mitchell, the quote ideally prepares you for the 16 chapters in which ‘Mitch’ shares tales from the middle, dressing room and beyond.

Whether it was just a casual chat or an actual interview, Daryl always made time for local journalists such as myself and was both insightful and opinionated.

It’s a trait reflected in ‘Once a Pear’ which is part love letter to the game he adores and part insight into moments of both great comedy but great drama.

Together with broadcaster Frank Watson, Mitchell has managed to take the honesty in which he played into telling his version of the events of September 26, 2016 – the day the Pears captaincy was taken away from him.

Several raw and honest paragraphs take you into the fateful meeting but also the impact the decisions had on relationships for some time after the event, some of which have not recovered.

While Mitchell makes it clear he has no animosity towards the club, it’s clear the events of that day and some of the decisions made regarding him afterwards have left their mark. The opening chapter alone will surprise you with its honesty but also its poignancy.

But throughout ‘the boy from Bret’ remained with the county of his birth, even when offers came along with a better salary, not only for the love of the county but his steadfast devotion to his family.

A real joy of ‘Once a Pear’ is the tales from the middle and the dressing room, from a simply wonderful prank on Jack Haynes’s bats to the inside story behind the bizarre signing of Adrian Shankar.

My personal favourite is the day he and Brett D’Oliveira faced England pace ace Jofra Archer at Hove – both laughing at the non-striker’s end as another rocket whistled past the other’s nose.

You’ll love the story of the bat recovered from a flooded New Road dressing room, the tale of his rather unfortunate encounter with a former British Prime Minister and the unexpected guests at his proposal to wife Danni.

As well as an enduring friendship with Moeen, Mitchell’s admiration for the late Damien D’Oliveira and Pears legend Graeme Hick is evident throughout the book as his is pride at the 2018 Blast triumph which meant so much to so many. His openness about the mental health challenges he faced are sure to strike a chord too.

His love of the game comes through in his reflections on captaincy and cricket as a whole. As someone who in my opinion should have played for his country I’m in no doubt he would be an asset to the ECB and their running of the professional game in England and Wales.

While the end may not have been the ‘stuff of boyhood dreams’, it’s a career to be proud of on and off the field.

And to think it could have all been different but for a Stuart Broad no ball…whatever happened to him? 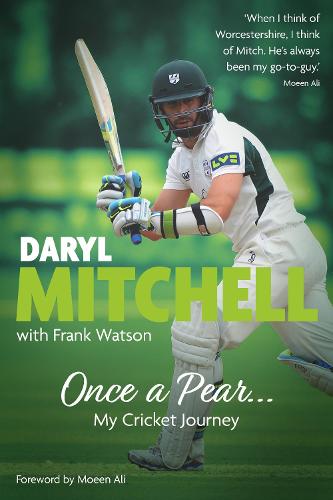 * Once a Pear…My Cricket Journey by Pitch Publishing is available from bookshops and from amazon.co.uk for £19.99