Warriors’ youngsters fought bravely at the weekend but were outclassed by a more experienced and powerful Exeter Chiefs side in a one-sided contest at Sandy Park. 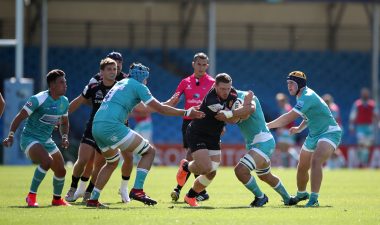 Having rested all the starting XV who defeated Harlequins at Sixways last week Warriors travelled more in hope than expectation against a full strength Exeter side who demonstrated why they top the Gallagher Premiership table.

A tough afternoon was always in prospect and so it proved as Exeter demonstrated why Warriors Director of Rugby Alan Solomons believes that they will be crowned champions in October.

Exeter’s relentless forward pressure and support play produced nine tries, six of them in the first half with the bonus point try coming inside the first 30 minutes.

Warriors stuck to their difficult task manfully and were rewarded for their efforts when Ashley Beck crossed for a consolation try.

But the main highlight for Warriors was a typically wholehearted performance from Matt Cox on his 100th appearance for the club.

Cox came on as a 51st minute replacement for GJ van Velze, who suffered a shoulder injury, and became only the 26th player in the professional era to reach three figures for the club.

Cox was making his first Premiership appearance of the season – and only his fourth in all competitions – having recovered from surgery which followed complications that followed a blood disorder, and he gave Warriors a physical edge in attack and defence.

By then Exeter had already wrapped up victory with lock Jonny Hill scoring a hat-trick of tries before the break.

Number eight Sam Simmonds also got a hat-trick, the third coming after he returned to the pitch having been substituted, and England wing Jack Nowell showed his finishing skill by dotting the ball down despite the attention of two tacklers.

It was a tough Premiership baptism for Warriors wing Alex Hearle who found himself opposing Wales and British and Irish Lions international Alex Cuthbert on his first start in the competition.

Hearle acquitted himself well but he had few opportunities to impress in attack as Exeter put the squeeze on up front and were quick to capitalise on errors.

Warriors, to their credit, tried to play rugby with skipper Will Butler and fly-half Billy Searle showing glimpses of promise.

But Warriors managed to apply pressure in attack only sporadically and they had a long afternoon at the coal face in defence as Exeter used their big loose forwards to effect.

Exeter scored again within 30 seconds of the start of the second half as they won the restart kick and launched a swift attack which gave full-back Stuart Hogg an easy run-in.

Warriors defended ferociously and denied Exeter another score for 15 minutes before Jacques Vermeulen rounded off a counter-attack.

Warriors thought they had scored a well-worked try when Scott van Breda rounded off a sustained attack only for referee Adam Leal to consult with TMO David Rose who spotted that Caleb Montgomery had brushed the touchline whitewash and the score was ruled out.

Sam Simmonds completed his hat-trick after 63 minutes and Warriors then enjoyed their best period of pressure which was rewarded when Beck rounded off another sustained attack and Searle converted.

GJ goes under the knife after Chiefs injury

The ball’s in your court at Pershore Tennis Centre

Wilkins capture is a big boost for Wolves