End of the road for ex-England winger Ashton

FORMER England winger Chris Ashton has seen his Sixways contract ripped up by mutual consent after playing just four times in the past 11 months.

Warriors bosses confirmed the immediate exit of the 34-year-old on Monday (December 13) after an ill-fated spill which has seen him absent from the squad from the entire 2021/22 campaign so far.

Ashton arrived at Sixways from Harlequins in January but calf and knee injuries have prevented him from playing for Warriors this season.

In a further bizarre twist, Warriors statement revealed the 70-mile trip from his Northampton home had proved ‘challenging’ for the former Saracens, Toulon, Sale and Harlequins wing.

“The daily commute from his home in Northampton had also proved challenging so the club and Ashton have agreed a release from his contract which was due to expire at the end of this season,” the statement read.

Ashton leaves Sixways after 11 months, hot on the heels of a similar short-lived spell with Harlequins with whom he spent 10 months.

Following Steve Diamond’s arrival at Sixways as lead rugby consultant, there was speculation the former Sale chief would seek to address the matter and get Ashton fit and firing in the blue and gold.

But in perhaps a sign of the tensions behind the scenes, Warriors responded to a European Challenge Cup Twitter page ahead of Friday’s opening game of the competition with Newcastle Falcons. 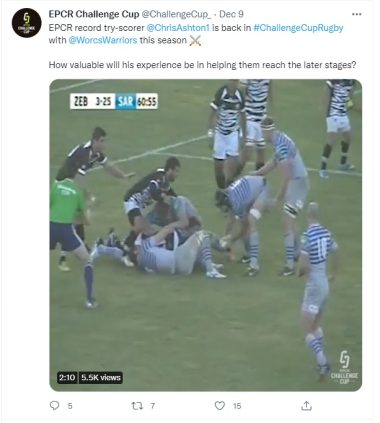 After the Challenge Cup admin suggested Ashton could be a key player in Warriors bid to reach the knockout stages, Warriors responded with “Not according to our team sheet”.

On the field, Warriors opened their European Challenge Cup campaign with an agonising 31-26 defeat but took two bonus points from Kingston Park.

Having drawn 24-24 in the Gallagher Premiership two weeks ago, there was again very little to split the sides who scored four tries apiece.

In the end the difference proved to be 77th-minute penalty from Newcastle’s replacement fly-half Joel Hodgson and a number of missed opportunities in a match of very fine margins.

The two points could prove significant in the coming weeks and on Saturday (December 18) Warriors welcome Biarritz to Sixways, kick-off at 3.15pm.

My best years will be with the Pears promises Hose

City up for the Cup with derby tie