THREE of the four lanes on the southbound M5 between Junction 5 (Droitwich) and Junction 6 (Worcester) has now reopened after the earlier lorry fire.

One remains closed while the tanker is recovered and repairs are needed to the carriageway which sustained fire damage.

The lane closure will remain in place through the day in preparation for the complex recovery work and resurfacing to be completed overnight to reduce the impact through the day.

The road will be closed from 7.30pm so National Highways teams can complete the safe recovery of the vehicle and repairs to the damaged carriageway.

Anyone who needs to use that stretch of the M5 should plan ahead, allow more time and find alternative routes where possible. 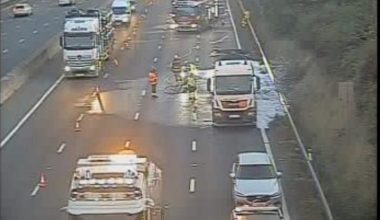 The lorry, carrying 28 tonnes of bitumen, caught fire around 4.40am.

Fire crews from both Droitwich and Bromsgrove attended and used foam and water reels to battle.the blaze.

Drivers faced delays of up to an hour but the waits are now down to 45 minutes.

Thousands of faces Light up as city festival shines

Probe as patient dies after five-hour wait outside Royal