Tributes to former Worcester Mayor who worked ‘above and beyond’

CITY Labour chiefs have paid tribute to former Mayor of Worcester and Honorary Alderman Clifford Lord who has passed away.

Having made Worcester his home with his parents at the age of six, Clifford was educated in the city and went on to have a long career in industry.

A life-long member of the Labour Party, he was first elected to Worcester City Council in 1950, representing the old St Martin ward for five years until 1955. 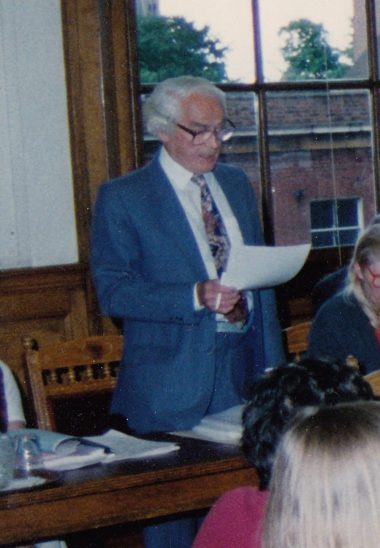 He then had a break of almost 30 years before returning in 1984 to represent the former Holy Trinity Ward for 12 years until 1996.

During that time he served as chair of both the Planning Sub-Committee and the Technical Services Committee.

He was Mayor of Worcester in 1987/88 and his contribution to the city was recognised when the City Council made him an Honorary Alderman in 2016.

Clifford was among four Worcester former councillors honoured as honorary aldermen in recognition of their 103 years’ combined service.

Together with Derek Prodger, Jeff Carpenter and Robert Rowden, he was endowed with the official titles during a ceremony at the Guildhall in November 2016.

The quartet were presented with honorary badges and certificates in a special ceremony hosted by Worcester City Council and then Labour Mayor of Worcester Coun Paul Denham.

Coun Adrian Gregson, Labour group leader at Worcester City Council, said: “Cliff was passionate about jobs and skills, heavily involved as a governor in local schools, and a constant advocate for good planning and development for local needs.

“He and his wife Muriel, who died in 2019, were stalwarts of the local Labour Party right up until his eighties.

“He was one of the first on the list of candidates when the City Council reinstated the role of Honorary Alderman for councillors who had contributed above and beyond to the city.

“His knowledge, expertise and dry wit will be sorely missed.”