MUSICIANS from The King’s School, Worcester have this week released their own charity single to raise funds as quickly as possible for those in need in Ukraine.

Pupils and staff at The King’s School, Worcester have been actively fund-raising to provide essential funds for those in Ukraine via Save the Children UK and the Disasters Emergency Committee (DEC). 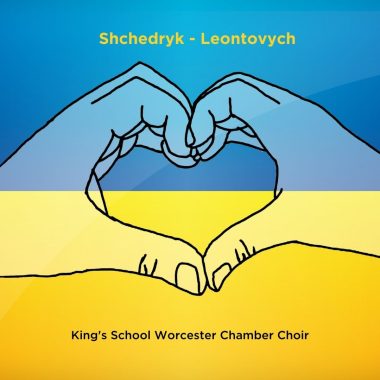 Following a raft of fundraising efforts, this week the School released a single across major streaming platforms including iTunes, Amazon, Apple Music and Spotify. The single, performed by The King’s Worcester Chamber Choir, is the Ukraine song called Shchedryk; written in 1916 by Ukrainian composer Mykola Leontovych.

The single is the first of its kind to be released from King’s and pupils and staff are aiming to continue to raise as much money as possible, with all proceeds from the release going towards helping those in need in Ukraine.

Director of Music, Simon Taranczuk said: “Amidst the ongoing conflict in Ukraine, the message that we send to those in a time of desperation is so important. By releasing this single pupils wanted to do something that sends a message of hope, love and goodwill from our community to all those in Ukraine. We hope the single spreads far and wide and we are grateful to all for their support in listening to and sharing the single.”

The single’s soloist and King’s Sixth Form student Sophie Lloyd added, “Despite the short notice of being asked to be involved, we all put our heart and into this as we know it is for such an important cause. The single release doesn’t just give hope and support to those in Ukraine, but also to those at war in other countries too. It was a real honour to be part of this and to be able to reach out to so many people across the world and give them a little bit of hope to just keep going.”

So far they have raised a staggering £6,500 to support their chosen charity, Save the Children (via the DEC). The charity days organised by the pupils saw everyone across the Foundation wear yellow and blue, run popular cake sales, make flags and raise money via concerts and events. Some Sixth Formers also donated their salaries from their part-time jobs to support the fundraising efforts.

The single is available to download from all major streaming platforms including iTunes, Amazon Music, Apple Music and Spotify. All proceeds from the downloads will be passed directly to the DEC Ukraine fund-raising efforts.