CATHEDRAL chiefs have welcomed new feathered friends as four peregrine chicks have hatched in a nest at the Worcester landmark – the first such occurrence since 2010.

And celebrating staff now want to hear from Worcester residents with names for the new fluffy arrivals before they fly the nest at some point next month.

Earlier in the year, a mated pair of peregrines nested, producing four eggs successfully in a nestbox built by the Works Yard team.

The chicks hatched in late April and a team of experts from the British Trust for Ornithology (BTO) has been monitoring them ever since. 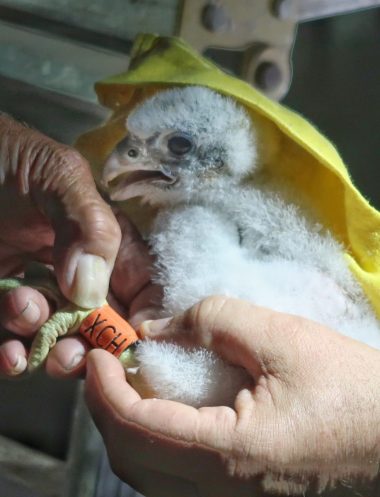 Ringers from the BTO rung the chicks, measured their wing spans, weighed and recorded them on the national database. Each colour ring has a unique letter code so the individual birds can be identified when seen in future as adult birds as peregrines can live for 15 or more years.

The chicks are expected to fly for the first time or fledge at around 45 to 50 days old, so roughly around mid-June.

In the meantime, the Cathedral has set up a livestream in the nest and experts are keeping a close eye on the chicks as they feed, develop, grow and finally fledge. The Cathedral hopes it will be online in the coming weeks.

Chris Dobbs, biodiversity advisor for the Cathedral, said: “Worcester is an incredibly biodiverse place, and the peregrines are part of that. The Cathedral has done a great job in making sure the peregrines have bred very successfully this year, for the first time since 2010, which was on St Andrew’s Spire on Deansway.

“This is a new pair of peregrines which have taken the territory and we now have four healthy chicks.

“Although peregrines are still quite rare, they are recovering well in the UK, largely due to the new habitats they take up in cities, of which Worcester is a great example. 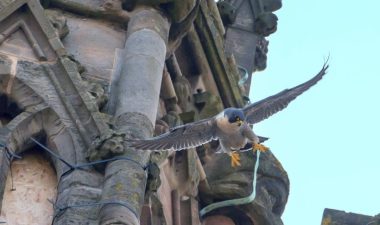 “The birds love cathedral towers because they are similar to their natural habitat nesting sites, which include quarry faces, sea cliffs, and mountain sides, as they like to have a high prospect looking over the area of their territory.

“Peregrines mate for life, so we can expect this pair to return to the Cathedral, hopefully for many years to come.

“Now we are able to monitor the nest with a live camera, much like many other UK cathedrals, and this will enable the Cathedral to report back on the progress of the birds over the years for everybody to enjoy,” he added.

Staff will then select their four favourite names and reveal them in June.