‘Humanity is at a crossroads’

David Attenborough: A Life On Our Planet is the pioneer’s most personal project yet. Georgia Humphreys finds out why from the man himself.

If there’s anyone who can make the world sit up and listen, it’s Sir David Attenborough. 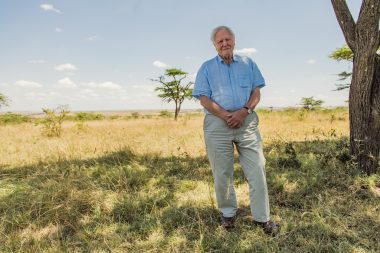 The 94-year-old naturalist and broadcaster, who was born in west London, describes the life he has had as “extraordinary” and “fortunate”.

It’s one that has seen him visit every continent on the globe, and make some of the most impactful TV series in our history, including Planet Earth and Blue Planet for the BBC.

And now comes a new film, David Attenborough: A Life On Our Planet – which serves as his witness statement for the natural world.

“I think we are at a crucial moment,” he urges.

“Without being too portentous on this, I think humanity is at a crossroads, and the natural world is really under serious, serious threat and the consequences could be apocalyptic.”

Although I don’t realise it at the time, he ends up being one of the last interviews I would do face to face, thanks to coronavirus (indeed, that’s also the reason the film’s release was delayed by months).

In a quote sent over by email reflecting on the Covid-19 pandemic, he notes how it has “caused, and will continue to cause, immense suffering”.

“If there is hope that can come out of it then that may arise from the whole world having experienced a shared threat and found a sense that we are all in it together,” follows the father-of-two, whose wife Elizabeth died of a brain haemorrhage in 1997.

“The same unique brains and communication skills that fuelled the development of our civilisations now have access to technologies and institutions that allow all nations of the world to collaborate and cooperate should we choose to do so.

“The time for pure national interests has passed. If we are to tackle climate change, enable sustainable development, and restore biodiversity, then internationalism has to be our approach. In doing so, we must bring about a greater equality between what nations take from the world and what they give back. The wealthier nations have taken a lot and the time has now come to give.”

It’s exciting people will finally be able to see A Life On Our Planet, which is premiering in cinemas across the globe, and will later be available on Netflix.

A revealing and powerful first-hand account, it sees Sir David reflect, for the first time, upon both the defining moments of his lifetime as a naturalist and the devastating changes he has witnessed.

Although we are very used to seeing the star on screen, there’s something about Life On Our Planet which feels that bit more intimate.

He suggests he could open up so much, and convey the concern he has, because of a technical trick Silverback used.

Instead of talking to a camera, he was being interviewed by the director of the documentary, Johnny Hughes, who appeared on an optical device as an electronic image.

The conversation – which saw Sir David “asked very clever, very perceptive questions, and got me arguing about certain things” – was recorded over several days and then segments of it were used throughout the film.

“It’s quite hard to look at the camera and speak in this kind of way, as we are speaking between ourselves now,” he muses. “To do that to a piece of glass is not easy, but this trick, they were doing it exactly as if I was looking at you, or him, in person.

“And I think when I saw it [the film]… Well, I suppose I was amazed at the image of this character on the screen who was speaking as if he was speaking not to a camera.”

Of course, whatever Sir David stars in, he commands attention. His awe-inspiring presence is felt even more so in real life; there’s a buzz of excitement in the air as he sits down at the table with me and other journalists, and we all fall silent.

But he’s not intimidating – far from it. He jovially pokes fun at himself, particularly when he gets some figures slightly wrong (“one of the things I’m hopeless at remembering is whether it’s 100% or 220% or whatever”, he quips).

A Life On Our Planet does actually end on quite a positive note as well, with Sir David saying that there is still time and humans can change things.

So, how does he think we can all play our part?

“The most important thing that we can do at this particular stage in the game is to put in the right politicians into positions of power who will say something about saving the planet, and to be quite vocal, as part of their electorate, that we demand that they actually do something and to convince them that we are prepared to take an increase in tax if necessary, to make sure that something is going to happen.”

The film starts and ends in Chernobyl, Ukraine, and the team also travelled to the Maasai Mara in Kenya.

The elephant in the room is that making such a big documentary like this must rack up quite a large carbon footprint.

But Sir David matter-of-factly defends this issue when it’s pointed out.

“We’re all damaging the environment just by sitting here and breathing,” he suggests. “The amount of carbon dioxide that is going out through the window as a consequence of us meeting here is significant. And do we always say, ‘Now was that really worthwhile, you spending that breath?’

“If you behave economically and sensibly, I don’t think you should feel guilty if it’s cost you some ergs in your engine to get you from A to B.”

Being wasteful is “the real sin”, he adds.

“We are astonishingly wasteful. I remember my dear father-in-law coming back in the middle of the war from America, and was appalled that he had actually seen an American at a meal stubbing his cigarette out on a half-eaten steak, because of the waste.

“We shouldn’t waste space; we are wasting space that could be occupied by the natural world.”

David Attenborough: A Life On Our Planet premieres in cinemas across the globe on Monday, September 28, featuring an exclusive conversation with Sir David Attenborough & Sir Michael Palin. The film will then launch on Netflix globally on Sunday, October 4.

What is muscle memory?

Six ways to support a loved one going through unemployment

Has life knocked you down? Join Idris Elba’s Fight Club