Bitterest pill: How The Jam reached the top then quit while they were ahead

THESE three sons of Woking, Surrey, with all the pent-up aggression of punk, rode the crest of the new wave movement, all the while creating their own unique sound, cramming an incredible five studio albums and four No.1 singles into their five-year recording career.

The Jam were frontman and songwriter/guitarist Paul Weller, bass player and backing vocalist Bruce Foxton and drummer Rick Buckler, all former pupils of Sheerwater Secondary School, who formed in 1972 but split up at the peak of their powers, by the end of 1982.

Weller was inspired to start the band after seeing his punk heroes The Clash but the three-piece ‘mod revivalist’ band found influences in everything from Northern Soul to 60s Britpop like The Who and The Kinks, and, in turn, inspired the next generation, writes James Iles.

Introduced to the Top of the Pops audience in 1977 performing ‘an effervescent 45 called ‘In The City’ The Jam burst into our living rooms with a whizz and a bang on their first top 40 hit that was typical of the fast-paced punky sound they championed in the beginning.

‘Batman Theme’ and ‘Slow Down’ echoed the energy of ‘In The City’ on the debut album of the same name which also featured the early promise of great songcraft in ‘Away From The Numbers’.

Stand-alone single ‘All Around The World’ was the next release and got to No.13 in the UK charts.

Never one to stick too long on a specific sound, Weller’s songs and The Jam’s style developed and progressed with a growing maturity with each of their next three albums, every time adding more and more fans and demonstrating ever more confident song-writing abilities.

Punk was more or less faded away by 1979 and, dressed in their familiar tight black suits and pencil ties with white shirts, The Jam were always in a class of their own anyway.

Weller’s incisive lyrics were already conveying the angst of youth and class wars with much greater resonance than the ‘spitting mob’. 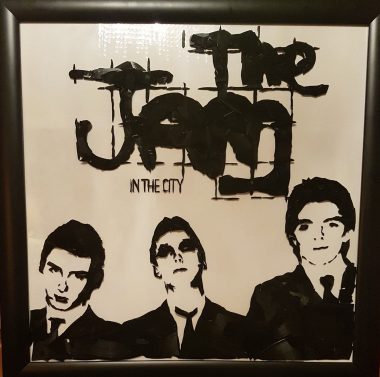 ‘A thousand things I want to say to you’ – The Jam’s ‘In The City’ album sleeve as recreated by Kirk Whitehouse / Smashed Hits Broken Vinyl.

The ‘All Mod Cons’ album was released in 1978 and really started to see Weller, Foxton and Buckler hit their stride both in their appearance and with top songs that were more Ray Davies than Pete Townshend. The LP was a major success and got to No.6 on the charts.

It spawned the double A sided single ‘David Watts/ ‘A’ Bomb in Wardour Street’ that hit No. 25 before the classic ‘Down in the Tube Station at Midnight’ that got to No.15.

Songs like ‘It’s Too Bad’ with its Beatles-esque Rickenbacker chord crescendos and bassline further confirmed the departure from the punk scene into more melodic pop sounds.

The Jam’s third album ‘Setting Sons’ went one better, rising as high as No.4 in the LP chart, and this is the release that truly established them as UK rock stars.

Featuring ‘Thick as Thieves’, ‘Private Hell’ and ‘Little Boy Soldiers’ it was initially planned as a concept album telling the story of three boyhood friends who later reunite as adults after a war. A prophecy for the band? Weller has consistently ruled out a reunion of The Jam’s original trio.

Lyrically, ‘Setting Sons’ was much more sharp-witted as was captured on the No.3 hit ‘The Eton Rifles’ (1979) with the brilliant lines: “Sup up your beer and collect your fags, there’s a row going on down near Slough.”

‘The Eton Rifles’ recalls a street fight Weller read about in the papers between right-to-work marchers in Slough and Eton College pupils who were jeering them during their lunchbreak. It was typical of the class hatred in Weller’s songs of the time.

The fags line is a double entendre meaning ‘pick up your cigarettes’ as well as referring to the hierarchies of boarding schools where the ‘fags’ were servants to the older students.

By the start of the 1980s The Jam seemed unstoppable. ‘Going Underground/Dreams of Children’, another double A side, scored them their first chart topper in March 1980.

They followed this up with ‘Start!’ which also hit No.1, and famously featured a bassline riff heard on ‘Taxman’ by The Beatles, as did the brilliant B side ‘Liza Radley’. 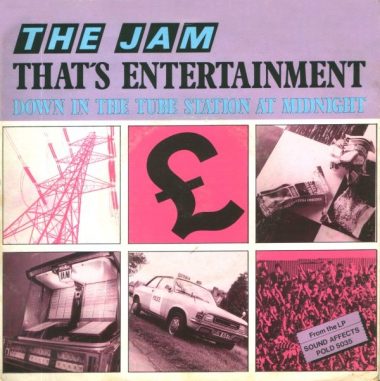 ‘That’s Entertainment’ was not an official UK release yet import copies alone carried it to No.21 in January 1981 such was the clamour for The Jam’s vinyl at the time. (s)

Start of the end

‘Start!’ was taken from the ‘Sound Affects’ album that got to No. 2 in 1980. ‘That’s Entertainment’ was not an official UK release yet import copies alone carried it to No.21 in January 1981 such was the clamour for The Jam’s vinyl at the time.

American R ‘n’ B influences started to creep into their sound, most notably on Buckler’s Michael Jackson-esque drumming on ‘But I’m Different Now’ and Foxton’s funky bass playing on ‘Pretty Green’.

Perhaps my favourite track on ‘Sound Affects’ is ‘Boy About Town’. It’s a joyous two minute slice of harmonic pop, with horns on.

‘The Gift’ (1982), the band’s fifth and final album, was also their only No.1 album. It followed the two standalone singles ‘Funeral Pyre’ and ‘Absolute Beginners’ that respectively peaked at No.4 in 1981.

There was a huge appetite for new releases by now and the lead-off single ‘Town Called Malice/Precious’ went straight to the top of the singles chart and stayed there for three weeks in January/February 1982, denying The Stranglers’ ‘Golden Brown’ pole position.

Written by Weller about The Jam’s hometown of Woking, ‘Town Called Malice’ contains more sharp class commentary with one of my favourite lines: “To either cut down on beer or the kids’ new gear it’s a big decision in a Town Called Malice.”

‘Town Called Malice’ embraces Weller’s love of Motown and features prominent organ motifs throughout. The lyrics reference the grey commuter town he grew up in with the ‘echoes of steam trains down the railway tracks’ and are said to be a metaphor for his burning desire to get away from the confines of the three-piece line-up of The Jam and broaden his horizons with outside musicians to sate his new found infatuation with soul.

That sweet soul sound is evident on the No. 2 hit that followed, ‘The Bitterest Pill (I Ever Had To Swallow)’.

With a guest vocal from Jennie Matthias of The Belle Stars, it was a real beacon of Weller’s next project ‘The Style Council’ and there was no sugar coating the news that followed – The Jam were to split up at the very pinnacle of their success.

It also went straight to No.1. The title is a play on words combining ‘Sweet Surrender’, a disco hit by Anita Ward, and the military action of ‘beating a retreat’ – Weller’s deliberate way of saying The Jam were over.

A live album ‘Dig the New Breed’ – featuring some songs recorded at their Bingley Hall gig in Birmingham in 1981 – offered some consolation for fans after they split. The LP entered the chart at No. 2, only being kept off the top by EMI’s John Lennon Collection.

Paul Weller went on to form The Style Council before going solo while Bruce Foxton still tours in ‘From The Jam’, a hugely popular ‘tribute’ band, which Rick Buckler was also part of initially.

The Jam’s influence has lived on in bands that followed – including Oasis, Ocean Colour Scene, Sleaford Mods and a lesser-known university band called Go Bossa (featuring yours truly on organs!) – and their songs still form an important part of Paul Weller’s gigs.

My top ‘The Jam’ tracks

Underrated track = Tales From The Riverbank

• Check out James’ ‘J is for The Jam’ playlist on Spotify at shorturl.at/yBXZ3

Strawberry Moon: what is it, when can you see it and what could it mean?