Rangers across the continent have joined an ambitious fundraising event to protect wildlife attracting tourists to the region, says Sarah Marshall. 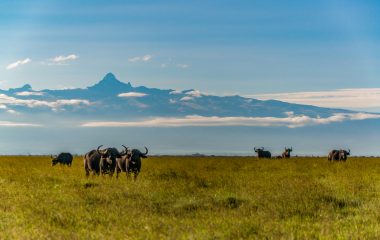 When an African ranger goes on night patrol, they never travel light.

Martin Kinyua’s backpack is bulging at the seams, and when I attempt to lift the load myself, I can barely raise it from the ground.

Today, though, the 32-year-old ranger and his Mount Kenya Trust team are on a different mission, and in place of rations and safety kits, their bags are filled with sand.

On October 3, teams of rangers across Africa ran a 21km race as part of the Wildlife Ranger Challenge, an ambitious initiative set up to raise funds for African wildlife’s first line of defence, who’ve been heavily impacted by financial cuts caused by the coronavirus pandemic.

A collaboration between NGOs Tusk Trust, NATURAL STATE and Global Wildlife Conservation, funded by The Scheinberg Relief Fund, it’s hoped the event will raise US$10 million through donations, sponsorship and a generous fund-matching scheme. 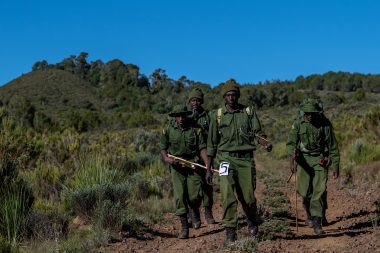 Since World Ranger Day on July 31, when the event was announced, teams have been training, doing press-ups, burpees and sit-ups to get in shape.

It was all essential preparation for a race where participants were required to carry a 22kg bag – matching loads transported by rangers on patrol. To put it in perspective, that’s the equivalent of running with a nine-year-old child on your back.

But for rangers across the continent, the sacrifice is symbolic: for the last few months, they’ve carried a far greater weight on their shoulders.

According to estimates from The Game Ranger Association, many of Africa’s 50,000 rangers have had their salary reduced by 50-80%.

Even though the Mount Kenya Trust have managed to retain their staff, many of the rangers have friends who are now out of work.

“We are doing this for our colleagues who have lost their jobs,” says Martin. “This is a way for us to help.” 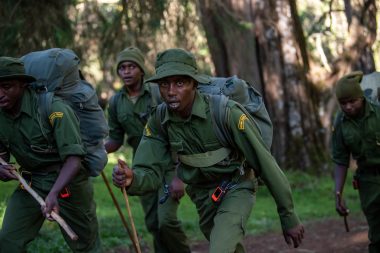 Setting off from their horse patrol base beneath the shadow of Mount Kenya, the team planned a route running through national forest and farm land. It’s a beautiful trail, winding through red cedar and rosewood trees, covering part of an area the rangers passionately protect.

Like so many of their colleagues across Africa, a love of nature lies at the core of their commitment to the environment. During the pandemic, they’ve had to work harder than ever to protect wild areas, as poverty in the community drives bushmeat poaching, deforestation and illegal charcoal production.

It’s a similar story in other parts of Africa.

“This Covid situation has been a real challenge,” admits Benson Kanyembo, Law Enforcement Advisor for Conservation South Luangwa in Zambia and winner of the 2019 Tusk Wildlife Ranger Award.

“We’ve had to reduce the size of our teams to patrol more areas. Without tourism, we don’t have as many eyes and ears on the ground. We have a huge area to cover in South Luangwa.”

Benson, who was involved in training a team for the Wildlife Ranger Challenge, admits communities surrounding the national park are suffering from increasing poverty, resulting in illegal activities, such as fishing, setting snares and cutting timber.

“But we are trying to work hard and do what we can,” he shrugs. “When you feel like you’re in a bad situation, sometimes your friends are even worse off.”

Funds raised from the event will cover salaries for at least 5,000 rangers, enabling them to provide for their families, protect communities and defend endangered wildlife. But even though competitors have crossed the finish line, there’s still a long way to go.

“We feel sorry for our friends, but this is something that’s brought us together,” says Benson, who is hopeful for the future.

“We are speaking one language and trying to work together.”

For more information on how to donate to the cause, please visit: wildliferangerchallenge.org

Shocking footage reveals dangers of not paying attention in roadworks

ITV’s I’m A Celebrity, Get Me Out Of Here – why the RSPCA are concerned for the animals

Do you still use office jargon even though you’re working from home?

Bookcase: Reviews of Leave The World Behind by Rumaan Alam and GIRL by Kenya Hun